skip to main | skip to sidebar

Seen: The Avengers (a huge helping of awesomesauce)

A couple girlfriends and I had been itching to see The Avengers since well before it came out - we talked about it for what seemed like ages. We decided to take advantage of our built-in babysitters (our husbands) and head out to the movies and welcome in summer as it was meant to be welcomed. The Avengers was one of the most highly anticipated movies of the summer - with a huge budget and a huge cast, the stakes could not have been higher for this movie. Joss Whedon had to balance the existing franchises of Iron Man, Thor, Captain America and The Incredible Hulk, as well as incorporating the rest of the cast and adding in a believable (to whatever extent comic-book movies are believable) AND all the while making a kick-ass summer movie. I've seen all of these movies. I loved them all. Even though the bar was set pretty high for me, I would probably like the movie regardless. I even liked Eric Bana's Hulk (though I preferred Edward Norton's by far). At the end of the day, did The Avengers usher in the summer movie season with the power of Thor's hammer and Hulk's smash in a giant serving of awesome with a side of kick-ass?

In more than a word, it was possibly the best comic-book movie I've seen; it was definitely the most entertaining movie of the year and one that I was happy to see twice.  This movie had everything that I could have wanted in it: action. banter. and this:
The movie had plenty of chances to stumble. The Incredible Hulk has a spotted history (at best), and I was apprehensive about Mark Ruffalo taking the job. I really liked Edward Norton as Bruce Banner and didn't really get why he didn't translate into The Avengers. And I enjoy Mark Ruffalo, but didn't know if he had the ability to Smash.
He did a fantastic job, of course. And I don't think that I could even see Edward Norton alongside the rest of the cast; Mark Ruffalo's Bruce Banner fit in so well with the rest of the cast that I thought he might change his name to Bruce Banter.

The only thing that I didn't get about the movie was the standard tease of the next movie during the credits. I had to consult one of my comic-book aficionado friends to figure out who it was. Now that I know who this "cosmic warlord Thanos" is, I'm pretty pumped for The Avengers II. 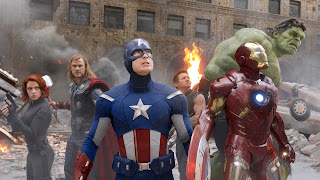 The Avengers worked because all of those things that could've gone wrong (but probably wouldn't and definitely didn't) went absolutely right. Ultimately, if the writing and acting didn't work, the movie wouldn't have worked. I was just glad to see that all of the characters and actors meshed so well. Even ScarJo.

Nicole
Italianist and Literaturist. Cal Bear and Wisconsin Badger. Mother (Liam and Kerry). Avid reader, tv-watcher, moviegoer. I like to think that I am fun, serious, focused, lighthearted, passionate and ridiculous. All at the same time.